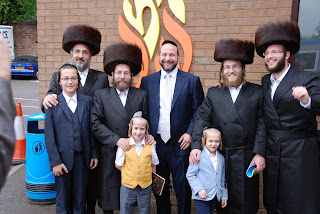 Last week Shabbos Parshas Nossoy, the Travelling Chassidim and their families were privileged to be hosted by the Jewish community of Bushey.

The Shabbos was dedicated in honour of the induction of the new Rov of the Kehilloh, Rabbi Elchonon Feldman Shlita. 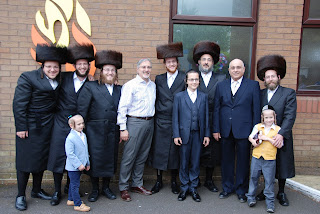 Led by Mr Binyomin Binet of Stamford Hill in North London, the group added to the ambience of this special Shabbos with their unique Ruach and lively singing.  The ladies of the community were entertained by the Travelling Chassidim’s family members, who contributed to the Shabbos atmosphere with wit and camaraderie, forging new friendships as the Shabbos progressed. The moving Carlebach-style Kabalas Shabbos led by Mr Moshe Meislik was followed by a communal Shabbos meal in the shul function hall. Over 100 community members enjoyed a Shabbos meal courtesy of Kelman's, in conjunction with Reich catering - replete with Divrei Torah, Zemiros and spirited dancing. 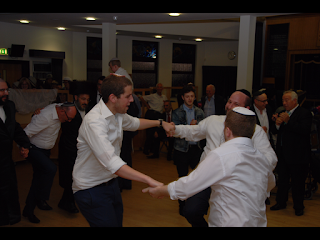 At the Seudah Sh’lishis the 200-strong crowd were addressed by several guests to the Kehillah, amongst them Mr Shloimy Stark of Travelling Chassidim’s Manchester division and Mr Menasche Scharf of its London branch. All speakers commended the remarkable spiritedness and noteworthy hospitality of the Kehillah members and their good fortune of having such a dynamic personality as their new Rov.
The visit ended with a moving Havdalah culminating in a lively dance to the sound of singing accompanied by the magic tunes emanating from Rabbi Chaim Yaakov Grunnfeld's keyboard.

Kehilloh members freely shared their feelings of gratitude with their guests; here are some of the comments that were shared by participants:
The Chief Rabbi complimented this event: "I met many of the people who participated in this Shabbos and they were all gushing about how wonderful it was.  A real Kiddush HaShem!" 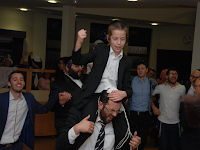